We provide age appropriate children’s services for:
Pre-K – 1st grade
2nd Grade – 5th grade
We have also included a craft for your children to enjoy if they would like! 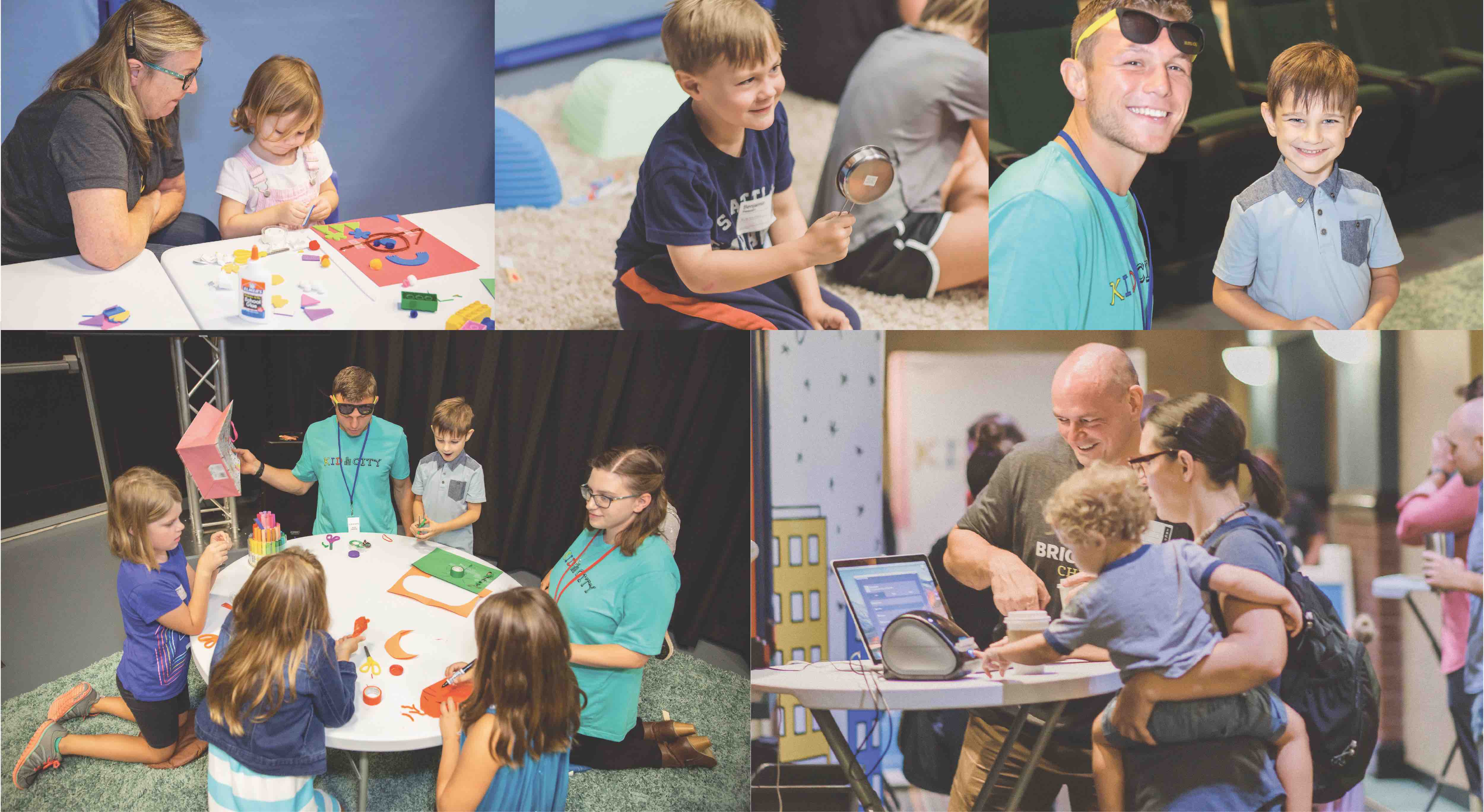 Our goal is for your little ones to have a ton of fun as they learn about Jesus through worship, age-appropriate lessons, and a variety of exciting activities. Our goal is to make Sunday your child’s favorite day of the week!

Kid City is fully staffed with a highly trained team of leaders who are background checked and committed to ministering to children. You can be confident that your child is well-cared for and will love every second!

Check-in begins 15 minutes before our service. You’ll either register your child for the first time or if you’ve been before, you’ll just check them in on one of our check-in station. Each child will receive a sticker tag and a parent tag that you’ll need
in order to pick them up after our experience is over.

It is for all kids age 6 weeks-5th grade.

Jesus Christ is God the Son, the second person of the Trinity. On earth, Jesus was fully God and fully human. He is the only human ever to have lived a sinless life. He was born of a virgin, lived a sinless life, performed miracles, died on the cross for humankind and thus, atoned for our sins through the shedding of His blood. He rose from the dead on the third day according to the Scriptures, ascended to the right hand of the Father, and will return again in power and glory (John 1:1,14, 20:28; 1Timothy 3:16; Isaiah 9:6; Philippians 2:5-6; 1Timothy 2:5).

The Holy Bible is the authoritative Word of God. It alone is the final authority in determining all doctrinal truths. It is a collection of inspired and infallible texts that are entirely perfect for their purpose—the self-revelation of God in Jesus Christ. “The Bible is to be believed in all that it teaches, obeyed in all that it commands, trusted in all that it promises, and revered in all that it reveals.”* (2Timothy 3:16; 2 Peter 1:20-21; Proverbs 30:5; Romans 16:25-26).

*This language is borrowed from: Kevin Vanhoozer, Jerry L. Walls, et. al., A Reforming Catholic Confession: A “Mere Protestant” Statement of Faith to mark the 500th anniversary of the Reformation. 2017.

THE GIFTS OF THE HOLY SPIRIT

The Holy Spirit is manifested through a variety of spiritual gifts to build and sanctify the church, demonstrate the validity of the resurrection, and confirm the power of the Gospel. The Bible lists of these gifts are not necessarily exhaustive, and the gifts may occur in various combinations. All believers are commanded to earnestly desire the manifestation of the gifts in their lives. These gifts always operate in harmony with the Scriptures and should never be used in violation of Biblical parameters (Hebrews 2:4; Romans 1:11, 12 :4-8; Ephesians 4:16; 2 Timothy 1:5-16, 4:14; 1 Corinthians 12:1-31, 14:1-40; 1 Peter 4:10).

The church is the Body of Christ, the habitation of God through the Spirit, with divine appointments for the fulfillment of Jesus’ great commission. Every person who is born of the Spirit is an integral part of the church as a member of the body of believers. There is a spiritual unity of all believers in our Lord Jesus Christ (Ephesians 1:22, 2:19-22; Hebrews 12:23; John 17:11, 20-23).

Water Baptism: Following faith in the Lord Jesus Christ, the new convert is commanded by the Word of God to be baptized in water in the Name of the Father and of the Son and of the Holy Spirit (Matthew 28:19; Acts 2:38).

The Lord’s Supper: A unique time of communion in the presence of God when the elements of bread and cup (the Body and Blood of the Lord Jesus Christ) are taken in remembrance of Jesus’ sacrifice on the Cross. Those who receive the elements with faith participate in Christ, are nourished by the power of the Holy Spirit and are commissioned to break themselves and pour themselves out for the world (Matthew 26:26-29; Mark 16:16; Acts 8:12, 36-38; 10:47-48; 1Corinthians 10:16, 11:23-25).

We believe in one God, the Father, the Almighty, maker of heaven and earth, of all that is, seen and unseen. We believe in one Lord, Jesus Christ, the only Son of God, eternally begotten of the Father, God from God, Light from Light, true God from true God, begotten, not made, of one Being with the Father. Through him all things were made. For us and for our salvation he came down from heaven: by the power of the Holy Spirit he became incarnate from the Virgin Mary, and was made man. For our sake he was crucified under Pontius Pilate; he suffered death and was buried. On the third day he rose again in accordance with the Scriptures; he ascended into heaven and is seated at the right hand of the Father. He will come again in glory to judge the living and the dead, and his kingdom will have no end. We believe in the Holy Spirit, the Lord, the giver of life, who proceeds from the Father and the Son. With the Father and the Son he is worshiped and glorified. He has spoken through the Prophets. We believe in one holy catholic* and apostolic Church. We acknowledge one baptism for the forgiveness of sins. We look for the resurrection of the dead, and the life of the world to come. Amen

*When the word “catholic” appears with a lowercase “c” it refers to the church worldwide, not a particular branch of Christianity.